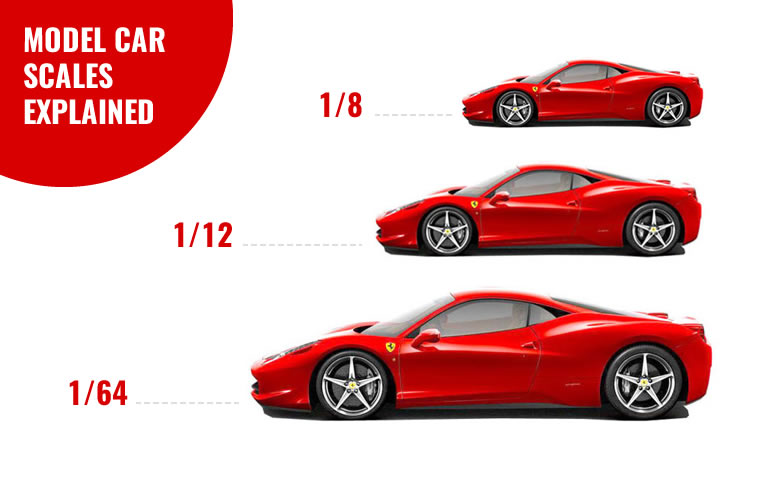 Model cars are available in a range of sizes, known as scales. Common model scales range from 1/64 to 1/12 and even 1/8. However for the uninitiated, these numbers may not mean much.

So, if you’re new to the world of model cars and want to find out a bit more about the different scales, you’re in the right place.

Before we look at the actual sizes and features of the different model scales, it might be helpful to talk about what we actually mean by “scale”.

A scale model is 3D physical representation of an object that maintains accurate relationships between all important aspects of the model. Scale models are usually smaller than the real object, but can also be bigger, like in the case of scale models of microbiological processes.

Scale models can be used for engineering, education, art and filmmaking, medical, architecture and design, and for hobbies and toys.

So, let’s have a look at some of the more popular scale sizes, starting with the smallest.

Cars in this scale are often mass produced and designed to “box scale”. That means the size of the model can be determined by the standard size of the packaging. Therefore a 1/64 model of a VW Beetle could be the same size as a model of a 1959 Cadillac, despite the difference in the sizes of the real cars.

1/43 scale is one of the most popular diecast model car scales in the world. These models are about 10 cm long. This scale was popularised by British toymaker Dinky Die Toys in the 1930s.

Models in this scale generally offer a good mix of detail and affordability. However, at the top end, there are highly collectible, limited production runs of 1/43 scale models featuring intricate detailing. 1/43 scale models are also popular as they provide good detail without taking up as much display space as the larger scale models.

1/18 scale is the most popular of the larger model scales. They are about 25 cm long. This scale became popular through the 1980s due to mass market brands like Bburago, Polistil and Maisto. During the 1990s, this scale became the standard for collectible diecast model cars. By the late 1990s and early 2000s, premium model brands like FrontiArt, MR Collection Models and BBR Models had moved beyond mass market production to create intricately detailed, highly collectible 1/18 scale model cars.

At the high end of the market, diecast 1/18 scale models are aimed at the discerning adult collector. They feature intricate detailing that is often modelled off the original designs of the vehicles in question. Detailing can include working suspension and steering, scale replicas of engines and under-chassis areas, genuine leather interiors, opening doors and bonnets, removable panels and more.

1/12 and 1/8 scale models are between 33 cm and 38 cm long. They are among the largest model cars available. Like 1/18 scale, they are usually highly detailed, collectible and aimed at the high-end adult collector market. They also tend to be more expensive than smaller models due to the size of the model, the detailing and the premium materials used.

Because of the size and price tag, these scales are not widely collected, but will often be featured as collection centrepieces.

If you’re thinking of starting a model car collection, it’s worth having a serious think about scale before you get started. You should consider your budget, your available display space and the type of vehicles you want to collect.