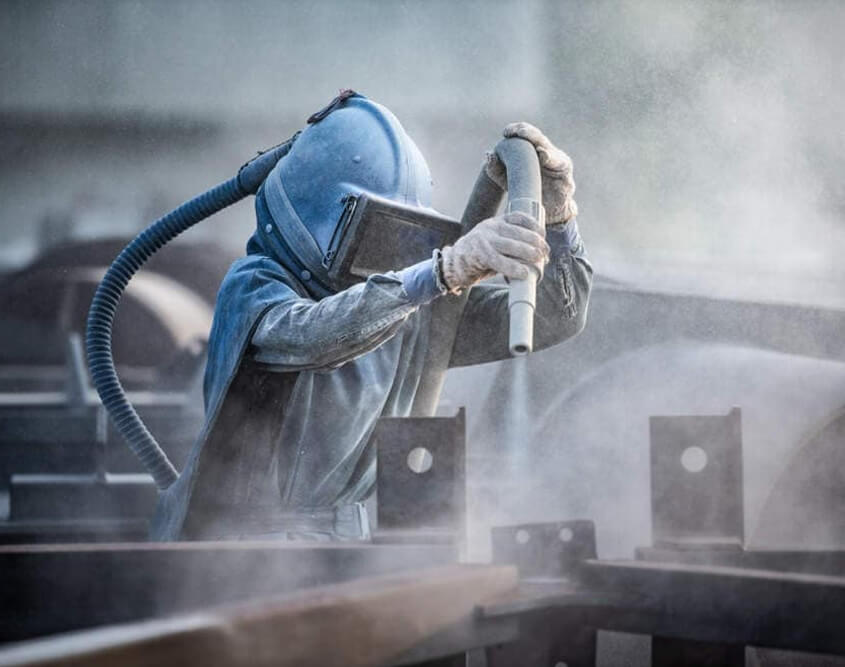 So let’s have a look at some of the different materials used for abrasive blasting.

What is Abrasive Blasting?

Abrasive blasting (or sandblasting, media blasting or grit blasting) is a method of surface preparation and cleaning. It involves using high pressure to forcibly propel abrasive material onto a surface. This process of abrasion is used to alter a surface and create a desired finish. Abrasive blasting can be used to smooth, roughen, shape, clean or finish a surface, or to remove contaminants and prepare a surface for further treatment, like painting or welding.

The term sandblasting has become shorthand for any type of abrasive blasting because sand was the first, and for a long time the only, material used for the process. However, as blasting and metal fabrication technology and processes progressed, a range of other blasting media came into use. As a result, abrasive blasting has evolved to use a range of different materials for a variety of purposes. Let’s have a look at a few of the main materials used.

Sandblasting uses dry silica or quartz particles as the abrasive material. The sand particles’ sharpness and size consistency makes it good for removing surface contaminants and achieving a uniform finish.

The silica used for sandblasting can be dangerous. The inhalation of crystalline silica dust can cause silicosis, an occupational lung disease that has been linked to working with sandblasting equipment. As a result, there are now strict OH&S and environmental regulations about how sandblasting is to be carried out.

Soda blasting uses baking soda or sodium bicarbonate as the abrasive. Because the particles break up on impact with the surface, soda blasting is a much gentler form of blasting. As a result, it is often used on more delicate surfaces like chrome, glass and plastics, which would be damaged by tougher abrasives.

One downside to soda blasting is that the media cannot be collected and recycled after use, which means it can be more expensive than other blasting methods.

Wet blasting mixes water with the abrasive medium. The water traps the dust produced and helps to lubricate the blasting surface and reduce the heat generated. Because the dust produced is trapped by the water, wet blasting is often used for blasting hazardous surfaces like asbestos and radioactive or poisonous materials. However, the water and abrasive medium still needs to be carefully collected and disposed of after blasting.

Wet blasting is generally less abrasive and will take longer than dry blasting since the water lubricates the blasting surface and the media. However, it can also result in an incredibly clean and smooth surface.

Steel blasting uses either angular steel particles (grit) or steel balls (shot) as the abrasive medium. It is generally used to remove paint and rust from metal surfaces. Depending on the choice of grit or shot and the hardness, it can be used for a variety of applications from polishing and surface cleaning to aggressive stripping and surface shaping. Because the steel medium can be easily collected and reused, steel blasting is quite cost effective.

Glass bead blasting, as the name suggests, uses fine glass beads as the blasting medium. Bead blasting creates a very smooth finish without damaging the surface. It’s often used on softer surfaces where you don’t want to alter the surface texture. It can be used to remove mould and colourations from tiles and grout and for removing paint in auto body work.

The glass beads used are non-toxic and not harmful to the environment. They are also 100% recyclable, making bead blasting a cost-effective process.

There are some naturally occurring abrasives that can also be used for abrasive blasting. These include walnut shells and corn cobs. Crushed walnut shells are used in the tumbling and polishing of soft metals, gems and jewellery, fiberglass, wood, plastic and stone.

Corn cob abrasive is made from crushing the dense woody ring of a corn cob into various grit sizes. It can be used for cleaning, deburring, burnishing and de-flashing applications on surfaces like jewelry, cutlery, engine parts, fiberglass and also for removing graffiti.